Oreo is a little cat with an important responsibility: Looking out for the residents of a Cleveland, Ohio, nursing home.

“Oreo found us,” Dana Carns, director of advancement at St. Augustine Health Ministries, told The Huffington Post in an email. The former stray wandered in about five years ago and made herself at home, though her online fame exploded this month after Cleveland.com produced a video about Oreo’s work at the facility.

Carns called Oreo “just another example of the love that you often find in a home,” adding that the nursing home also has an on-site dog named Coco. “They both give residents something to look for, to care about, to love on,” she wrote.

The facility cares for more than 200 residents, Carns said. Those residents include aging individuals as well as people coping with strokes and brain injuries.

“Oreo is not a ‘lap cat’ but likes to be close,” Carns said. “She loves to have her head scratched. Residents, staff and the children from our early learning center, look for Oreo. She is most often the greeter.” 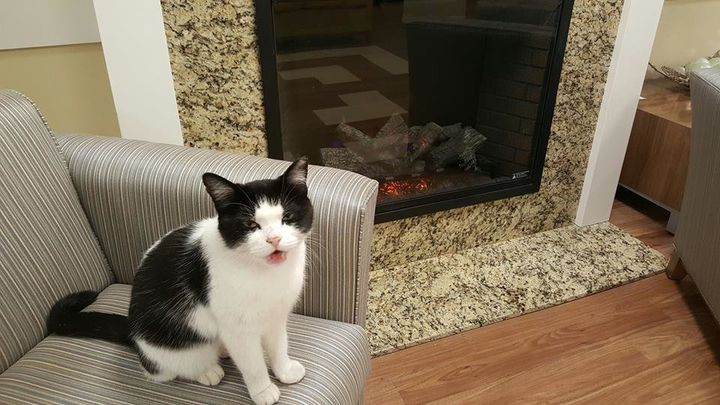 The black and white feline provides comfort, love and entertainment to St. Augustine residents and employees alike. She lives on the main floor of the nursing home but doesn’t go upstairs to the residents’ rooms.

Carns noted that on a few occasions over the years, some residents have brought their own cats to live with them, but it rarely worked out, since the animals didn’t adjust well to the new, busy environment of the facility. And most residents, she said, aren’t able to help care for their own pet.

In the video above, it’s obvious how much joy Oreo brings to the residents.

“I’m not sure if Oreo was in need of us, or we were in need of Oreo,” Carns said. “But she’s a great addition to our family.”