Spoiler alert: Nothing at all.

As Friday the 13th rolls around, pictures of black cats are popping up everywhere. For some reason, black cats have been doused with a witch’s brew of superstition—the result of cult horror films (remember the Anna Faris vs. black cat fight scene in Scary Movie 2?) and society’s unending portrayal of black cats as unlucky or evil.

But let’s get real. With over 80 million cats who are a part of American households, millions of people love and share their homes with black cats.

In fact, scratch beneath Hollywood’s horror-filled black cat depictions and you’ll find raven- furred kitties curled on the couches and in the laps of some of Tinseltown’s most famous celebrities.

Elizabeth Taylor, Brigit Bardot, Robert Redford, Morgan Freeman, Nicole Kidman and John Travolta all have shared their homes with black cats. Wildly popular Walking Dead star, Norman Reedus, even included his much loved black cat, Eye in the Dark, in his 2013 People Magazine photoshoot. If celebrities can axe the black-cat-as-evil mythology, so can the rest of us.

But let’s widen the lens. Black cats aren’t the only felines people are taught to fear. It’s cats in general. Even though cats surpass dogs as America’s favorite pet, feline hate-mongers demonize cats for a slew of reasons that have no basis in fact. Cats are wrongly blamed for everything from sucking the breath out of babies to spreading disease to causing the demise of endangered species.

Let’s get real again. Cats don’t deserve the blame for any of these ridiculous accusations. They don’t steal babies’ breath. They are healthy members of the community. And real science-not sensationalized media headlines-shows cats aren’t the cause of wildlife population declines.

What’s seldom mentioned is the many health benefits of cats. For instance, cats provide companionship and help people cope with loneliness and loss. Cuddling a cat can lower blood pressure and reduce the negative effects of stress. One study found that cat owners were 40% less likely to die of heart attacks or strokes than non-cat owners. Studies also show that a cat’s purr can help heal bones and reduce infection and swelling. As for children, a National Institutes of Health study reveals that when children under one-year of age are exposed to cats, they are less likely to develop many kinds of allergies-not just pet allergies.

It’s time to move our cattitudes out of the dark ages and stop demonizing America’s favorite pet. The simple truth is cats make the world a better place. So if you see a black cat on Friday the 13th (or any day) consider yourself lucky. After all, the only bad luck following cats is people’s superstitions. 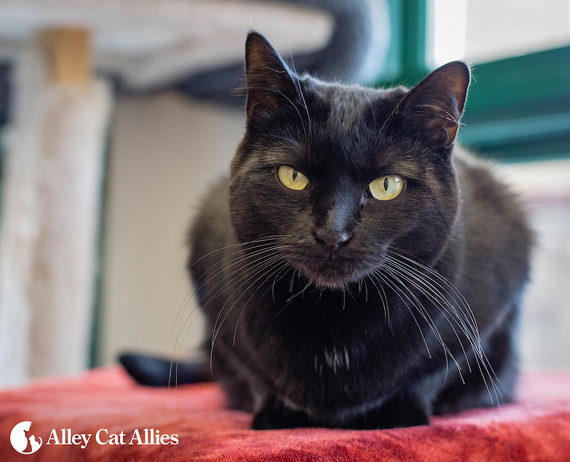